The topic of this page has a wiki of its own: The 7D Wiki. 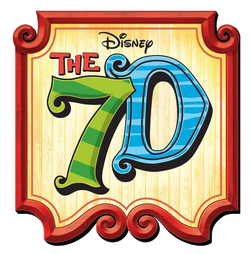 The 7D is a current animated musical comedy series produced by Disney Television Animation for Disney XD based on characters from the 1937 Disney film Snow White and the Seven Dwarfs, developed by Noah Z. Jones and executive produced by Tom Ruegger. The series feature the updated Seven Dwarfs -- Doc, Grumpy, Sneezy, Sleepy, Bashful, Happy and Dopey -- in the magical, contemporary world of Jollywood, with new characters. The series has its world premiere in the United States on July 7, 2014 on Disney XD. It was renewed for a second season on December 2, 2014. However, co-executive producer Mr. Warbuton announced on April 25, 2016 that the series was cancelled in January 2016 and the series finale would premiere in September 2016;[1] however, the final episodes slated to air for that month was pushed to October.[2][3] The series finale was scheduled for October 29, 2016; it was later moved to November 5.[4] The series also aired for a limited time on Disney Channel (including its Disney Junior on Disney Channel block) and Disney Junior the channel presumably as promotion for the series.

In the kingdom of Jollywood, the 7D work at their jewel mine underneath their cottage. They are also committed to protect the kingdom and its citizens -- Jollywood's ruler, Queen Delightful, summons them via the magical Bing Bong Bell whenever there's trouble. Most episodes feature the main villains -- Grim and Hildy Gloom -- who they longed to take over Jollywood usually by stealing powerful gems from the mine or any other means. The 7D's duty of protecting Jollywood was passed on from their grandfathers, the founding fathers of the kingdom, who long ago defeated an evil warlock ("The Jollywood Jam").

Announced in July 2012, The 7D was originally intended as a series for Disney Junior.[5] The dwarfs' new look was created by Fish Hooks creator Noah Z. Jones, who was also the series' character designer. (Jones later left the show after its first season to produce another Disney series Pickle and Peanut.) However, while the new series' preschool demographic was later expanded to include all ages and moved to Disney XD, so does the 7D's look, which was then tweaked.[6] The first episode produced, "The Littlest Giants / Gnome Alone", was animated in Flash.[7] Later episodes in production order are traditionally animated. From the beginning, The 7D is animated overseas by Toon City in the Philippines and South Korea-based Digital eMation; starting in the second season Wang Film Productions in Taiwan joined the aforementioned studios.

The songs in The 7D are composed by Parry Gripp, who also sings in some of them as well as the theme song.[8] The cast also perform the musical numbers. Many of the series' staff writers also contributed lyrics. The series' underscore are composed by Keith Horn with Gripp.

Retrieved from "https://disneyxd.fandom.com/wiki/The_7D?oldid=10206"
Community content is available under CC-BY-SA unless otherwise noted.